Cosy 2 bed next to ExCeL Centre

This very modern two bedroom apartment forms part of a 12 storey building which is located next door to the famous excel exhibition and conference center opened in November 2000.

During the games, Excel played host to a total of 143 sessions across a wide range of sports including both in the Olympic and Paralympic sports.

The property does not just benefit from a close proximity to the Excel Centre but also the Royal Victoria DLR station which again is at the back of the building. The DLR goes straight to Stratford International (OLYMPIC STADIUM) within 11 mins,. You can also use the DLR to central London, 2 stops to Canary Wharf.
The journey time is about 20Mins.

This property is also next door to Crowne Plaza Hotel, so if you feel like eating out or having a drink in a very trendy environment then you have it. In total you will have access to about 6 hotels in the area including, Renaissance, Novotel & Ibis.
The apartment also benefits from a sit out terrace over looking the water front.
This accommodation gives you the opportunity to have a very relaxed warm homely living in a trendy environment with all you need within walking distance. Numerous bars and restaurants are also situated in the area.

The apartment itself benefits from a two double bedroom with lots of storage space. All the bedrooms have a top to bottom window which allows lots of sunlight. The entire apartment can sleep up to 5 people.
The living room is an open plan living which also benefits from a top to bottom window and a door leading to the terrace. Also included is a three seater lazy couch and a two seater couch.
The television is a flat screen packed with sky channels. There is also an unlimited wireless Internet access.
The kitchen is fully equipped with Washing Machine, Oven, Microwave,Coffee Maker, Toaster and all your utensils.
Secure underground parking space can be arranged (ON REQUEST) 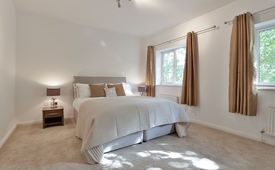 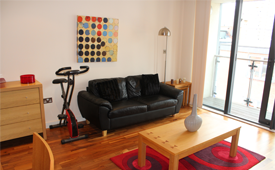 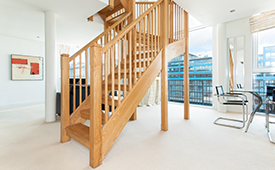 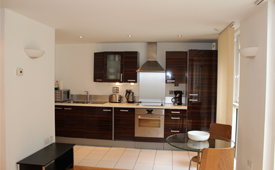 Trendy apartment next to ExCeL 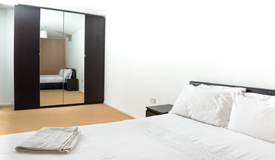